Tomorrow is an election but unlike others in NJ history. Pushing through an all Vote-by-Mail election, HudCo Democrats are leery of the outcome with an inert Joe Biden atop the ticket and Congressman Albio Sires feeling his collar tightening with a real primary challenge.

The VBM returns are low. The reasons may be many but a low turnout risks a possible upset. As polls show one in five Democrats believe Joe Biden has cognitive issues, lower turnout may see a closer outcome or a long shot shocker.

Mayor Ravi Bhalla announced another mild spike into low double digits of the Chinese Communist Party (CCP) Virus. Last time this occurred not long after he joined in with the Marxist group Black Lives Matter protestors in Hoboken, he attempted to blame "foreigners."

Ravi Bhalla previously defended hosting the protest in Hoboken calling it a related black health issue as he dove headfirst into the media cameras. He claims he has evidence this second spike mostly originated from people visiting southern states.

Many are voicing they don't believe him and are ridiculing his pandemic protest hypocrisy. Unlike  Ravi Bhalla paid political operatives and insiders, these people are not voicing their criticism anonymously. Low brow pandemic politics spares none unlike the actual virus where the Center for Disease Control (CDC) postulates the virus' spread may be ten times higher inside the United States than current data suggests. Can you say herd immunity?

Herd immunity would actually provide protection to seniors and the vulnerable with underlying conditions but it's not likely governors will act on data pointing to it as they will lose control over their respective populaces, especially before the November election.  The FearPorn Media is playing its part, emphasizing virus case counts while ignoring the mortality totals that have seen significant decreases nationwide. It's reportedly fallen to a new low of 209, last seen back on March 23rd.

The Independence Day weekend smoked out more barbecue. The DNC deemed an Independence Day celebration at Mount Rushmore as "glorifying white supremacy" but later rethought the announcement and removed it from Twitter. Better luck next year? 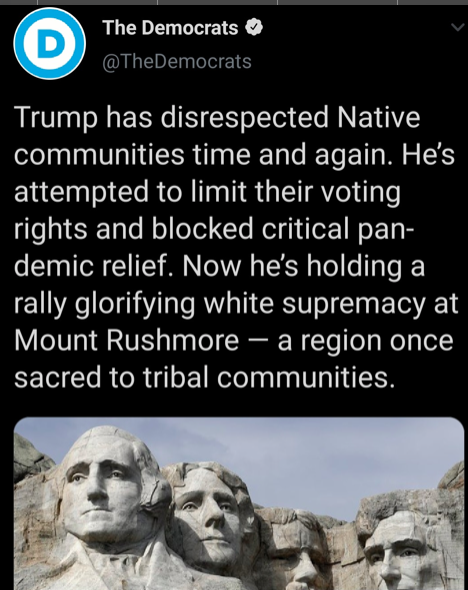 Also during the holiday weekend, another Christopher Columbus statue was reportedly taken down and dismantled by a mob in Baltimore with no interference by local authorities. The statue was then taken to the river where it was dumped. Some including the Maryland governor are now saying it's not such a swell idea.

In Rochester, a statue of former slave Frederick Douglas, a prominent Republican who believed the nation's founding could see both the end of slavery and living up to the creed of its founding documents became the latest victim. A statue of the civil rights Civil War era icon was taken down in Rochester and found 50 feet away. The damage is reportedly unrepairable.

In Hoboken, county police are making their presence felt at Columbus Park. Some residents have reportedly extended thanks for not allowing Hoboken to fall victim to the Leftist mob violence.