Sign of the Times: Phantom voting in Pennsylvania from Hoboken

New Jersey, aka the Soprano State is set to host its biggest, all-time fraudulent election this November.

Courtesy of unrestricted Vote by Mail ballot distribution without a single verifiable safety standard added, the fun and games are squared away for the November presidential election.

The dead, those who've moved and all manner of skullduggery are cordially invited courtesy of Governor Phil Murphy and his executive action.

That executive "necessity" is blamed on the fading pandemic.

Last spring, one Hoboken resident proudly displayed their ballot to vote in the primary - all three of them!

At least this NJ voter confirmed proof of life, unlike others.

The Soprano State nursing facility turnout for those present and recently departed is forecast to reach 99.9%!

In Paterson, NJ, a judge ordered its spring municipal election be put back on the ballot this November as fully 20% of that election's Vote-by-Mail balloting were disqualified with all manner of fraud.

Not enough opportunity for you to vote early and often? Well, how about voting in Pennsylvania, a bonafide battleground state?

A reader submitted this Pennsylvania voting opportunity for November when an application to vote arrived to their Mile Square City address.

The person named on the application never lived at the Hoboken address according to the long time resident.

When it comes to massive institutional voter fraud, there's no telling where the hijinx will end with the Wolf at the door. 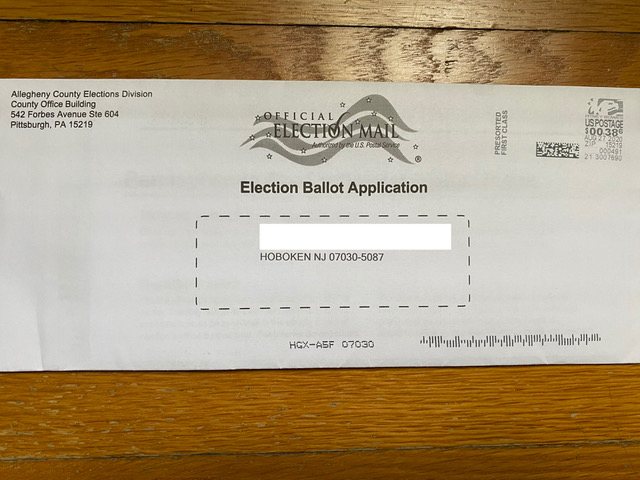